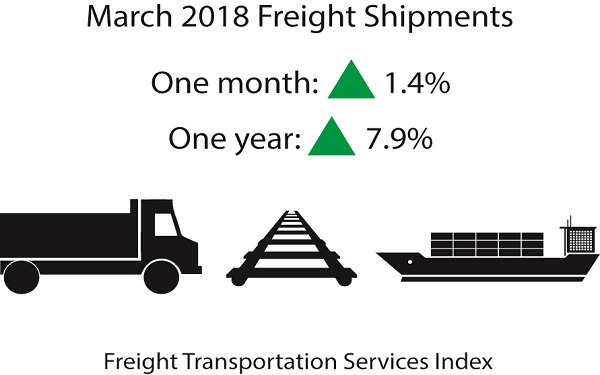 The Freight Transportation Services Index, which is based on the amount of freight carried by the for-hire transportation industry, rose 1.4 percent in March from February, rising for the second consecutive month to reach an all-time high. The March 2018 index level of 130.8 was 38.0 percent above the April 2009 low during the most recent recession.

The new all-time high is 0.7 percent above the previous high in December 2017. The Bureau of Transportation Statistics began keeping TSI records in 2000.

The Freight TSI measures the month-to-month changes in for-hire freight shipments by mode of transportation in tons and ton-miles, which are combined into one index. The index measures the output of the for-hire freight transportation industry and consists of data from for-hire trucking, rail, inland waterways, pipelines and air freight. The TSI is seasonally-adjusted to remove regular seasons from month-to-month comparisons.

The March increase of 1.4 percent in the Freight TSI showed increases in all modes except pipeline, which was stable. The TSI increase took place against a background of mostly positive results for other indicators. The Federal Reserve Board Industrial Production index rose by 0.5 percent in December, with significant increases in mining and utilities and a very small increase in manufacturing. Personal income and housing starts grew.