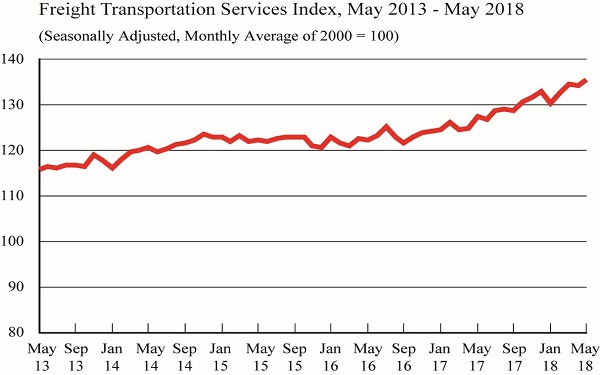 The Freight Transportation Services Index, which is based on the amount of freight carried by the for-hire transportation industry, rose 1.0 percent in May from April, reaching a new all-time high after falling slightly in April. The May 2018 index level was 43.0 percent above the April 2009 low during the most recent recession.The

The level of for-hire freight shipments in May measured by the Freight TSI at 135.6, the third new high in the past four months. The index is up 6.4 percent in one year and 11.1 percent in two years. TSI records begin in 2000.

The May increase in the Freight TSI was broad-based with increases in all modes except pipelines. The TSI increase took place against a background of mixed results for other indicators. The Federal Reserve Board Industrial Production index declined by 0.1 percent in April, with a decrease in manufacturing. Personal income grew, but housing starts declined, while the Institute for Supply Management Manufacturing indexExternal Links icon rose to 58.7, indicating accelerating growth.

The Freight TSI rose to its second record high in three months, and its fifth record high in eight months with the 1.0 percent increase in May. The Freight TSI’s level for the last three months has exceeded any level it had previously attained. During these three months, the index average was 7.3 percent higher than the same three months in 2017 and 10.6 percent higher than the comparable period in 2016. The index has exceeded a level of 130 in every month since October 2017, a level it had never previously reached.

The Freight TSI grew by 4.1 percent since January 2018. The May index was 43.0 percent above the April 2009 low during the most recent recession.