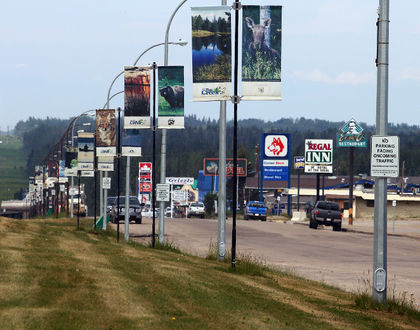 Fox Creek Alberta has its own special hate on for trucks

Fox Creek’s town council has passed a bylaw requiring some truckers to buy a permit if they want to drive on municipal roads.

“What we’re finding is there’s a lot of overweight vehicles coming into town and they’re wreaking havoc on the infrastructure, particularly the roads,” Fox Creek Mayor Jim Hailes said on Friday.

The northwest Alberta town’s economy is booming. Oil and gas companies are working all around Fox Creek. That means large trucks carrying loads like heavy frac sand often park along two major roads inside Fox Creek waiting to be called to the jobsite.

A drive down these two streets highlights the problem facing town councillors.

The pavement has disintegrated along the curbs where the trucks park. Large ruts, failures and potholes fill the streets.

Hailes thinks it would likely cost between three- and five-million dollars to repave just one of the damaged roads and the town’s tax base can’t handle that.

The bylaw requires all overweight or oversized loads to purchase a permit from the town. The permit costs vary depending on the size of the truck or what it’s hauling. In most instances, documents from the town suggest it would cost truckers $100 per year for a permit on a fleet of up to 10 trucks. Those who don’t purchase the permit face fines.

The bylaw takes effect July 1 and it has caught many truckers off guard. Nobody turned out to public hearings on the bylaw and truckers Global News spoke with said they received no warning about the town’s plan.

“Now to have towns trying to tax us on top of that is unacceptable. If Fox Creek can do it, other towns can do it and then every place we get a call to do work at, we’re suddenly going to have to buy another permit.”

Reeves is fighting back. He has delivered a letter to business owners along the road adjacent to Highway 43. He lets them know why he’s angry and he has told his drivers how to respond.

“If we have to buy a permit, we will, but we won’t stop for fuel, food, hotel [or] restaurants until they back off on this money grab.”

Reeves even said if his drivers run low on fuel, he has told them to call him and he’ll get fuel delivered rather than pay for it in Fox Creek.

Hailes says the problem is deeper than simply a question of whether the permit plan makes sense. He says Fox Creek faces similar problems to Fort McMurray during the boom years.

Tens of thousands of people work on jobsites around Fox Creek. They use municipal services but do not pay property taxes, meaning the town is trying to serve a massive population with a very small tax base.

The mayor adds he and others on council have approached several provincial ministers about the perceived inequity.

“We’ve reiterated our concerns and the pressures we’re facing to several of them. It’s been a while since we have spoken to the minister of transportation.”

Alberta’s transportation department issued a statement saying it was aware of the recently passed bylaw.

“The department is reviewing the bylaw to ensure it is consistent with provincial legislation,” a spokesperson said.