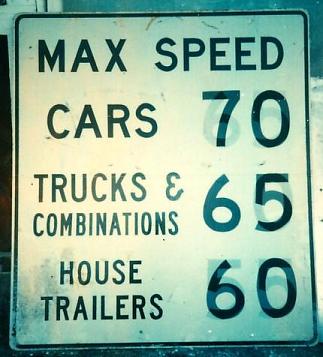 Elected officials in states from California to Mississippi are discussing possible changes to speed limit rules.  Legislators in multiple states are pursuing the elimination of speed limit differentials for cars and trucks.

One state lawmaker wants to do away with the speed differential for cars and trucks.

Currently, smaller vehicles are allowed to drive 65 mph – 70 mph in certain locations – while large vehicles are limited to 55 mph.

A renewed effort in Indiana would also do away with speed differentials.

Indiana law now permits cars to drive 70 mph while vehicles in excess of 26,000 pounds are limited to 65 mph.

Rep. Mike Aylesworth, R-Hebron, has introduced legislation in three of the past four legislative sessions to do away with the speed gap on rural stretches of interstates and the Indiana Toll Road.

His latest effort to permit trucks to travel 70 mph would affect an estimated 63,000 vehicles registered in the state and thousands more that access Indiana interstates on a daily basis.

If approved, the Indiana Department of Transportation has reported that 68 speed limit signs with the 65 mph restriction would need to be changed.

A fiscal impact statement attached to the bill, HB1092, notes that the expense to the state to change signs would be about $11,000. In addition, it is estimated the switch could result in fewer speeding citations.

The bill is in the House Roads and Transportation Committee.

Faster speeds are under pursuit at the Iowa statehouse.

One bill in the Senate Transportation Committee would bump speeds on interstate highways from 70 to 75 mph.

There are 17 states that authorize speeds of at least 75 mph. Only two of those states (Idaho and Montana) allow cars to travel one speed – 80 mph – while keeping trucks at a slower speed – 70 and 65 mph, respectively.

Critics say that truck tires are not designed to handle speeds in excess of 75 mph. They point out that tire manufacturers say traveling faster than 75 mph can cause tires to blow out, creating safety issues.

Another point made is that many motor carriers set maximum speeds on commercial vehicles at 65 mph – to save fuel.

Mississippi lawmakers could soon review a bill that covers large truck traffic during bad weather.  State law requires large trucks and buses to slow down to 45 mph on highways when visibility is reduced because of “inclement weather.”

Rep. Credell Calhoun, D-Hinds, again has introduced a bill to remove the requirement that visibility must be bad for affected drivers to slow down during snow, ice or rain storms.

HB157 is in the House Transportation Committee.

One Missouri state lawmaker is hopeful to bump speeds on the state’s fastest roadways.

Rep. Ron Hicks, R-Dardenne Praire, has introduced a bill to raise speed limits from 70 to 75 mph for all vehicles on stretches of rural interstates and freeways.

Hicks’ bill, HB295, is in the House Transportation Committee.

The House Transportation Committee held initial discussion Wednesday, Jan. 24, on a bill to increase speed limits for all drivers along certain highways.

State law now authorizes speeds of 75 mph on Interstates 29 and 94. Speeds along four-lane divided highways are set at 70 mph. Two-lane highways are posted at 65 mph.

Blum says the change would allow for more efficient travel through the state. He adds that nearby South Dakota, Montana and Wyoming already permit 80 mph travel.

The North Dakota Department of Transportation estimates the change would result in expenses for the state totaling nearly $5 million. The agency cites costs for signage changes and roadway reconstruction.

Multiple bills filed for consideration during the regular session that convenes Feb. 4 would amend rules on speed limits for the state’s turnpike system.

Oklahoma already permits all vehicles to travel at 75 mph on four-lane divided highways, including interstates. A 2016 state law, however, permits higher posted speeds after a state Department of Transportation engineering and traffic investigation.

In 2018, a similar bill was approved by the Senate but it died in the House.

One bill in the Oregon Legislature would permit changes in speed limits in the state’s largest city.

HB2702 would authorize the city of Portland to designate speed on the main arterials. Currently, only the Oregon DOT is permitted to make changes.

The bill is in the House Transportation Committee.