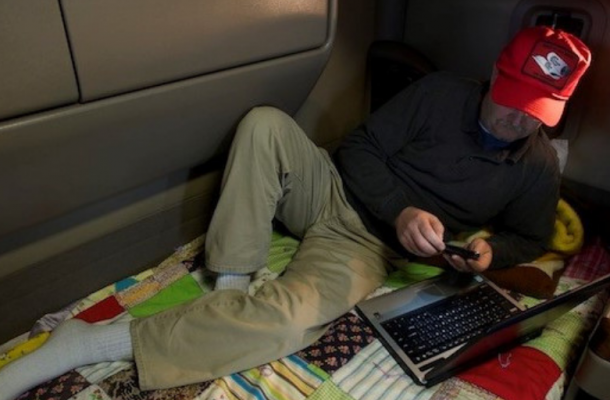 Bill McNamee, a professional truck driver for Carbon Express, never spends his nights in his sleeper berth while out on the road; instead, his company requires that he sleep in hotel rooms, and he hopes to never spend another night in his sleeper again.

“After 20-plus years of being in the truck stop, this was foreign to me, but then you realize you can turn off the work switch, relax, and shower at the end of the day,” he said.

Owner of Carbon Express, Steve Rush, says switching all of his company-owned tractors to day-cabs and making the move to hotel lodging in 2010 was the best decision he’s ever made.

“The benefits speak for themselves: better sleep, no parking problems, and drivers are treated as all other mainstream people at work are, rather than being pushed aside,” Rush said.

He added, “Sleeping in the back of the truck is like you working at your desk all day long then pulling out a portable bed and going to sleep.”

Rush also stated that his company’s overall productivity has increased since his day-cabs can haul 11-21% more product that his competitors due to the weight-savings compared to a sleeper tractor.

According to Rush, the increase in productivity and lower equipment costs helps him offset the expense of the hotel bill, which can average anywhere from the mid-$30,000 to high-$40,000 range each month.

“You get more for what you do,” he said. “You don’t have the turnover. You don’t have all the accessorial equipment. You have a rested driver.”