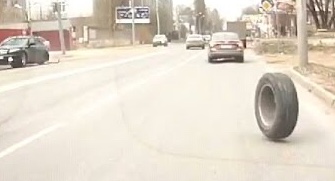 Wheels fall off cars too.  Sometimes with the same catastrophic consequences as trucks.

A truck driver was treated for injuries after one of the front wheels from a black sedan came off and crashed through the windshield of a Peterbilt on Interstate 78 near Allentown, Pa., on Saturday, March 16.

The incident occurred at 9:47 a.m. on Saturday. The sedan was traveling westbound when a wheel came off and moved into the eastbound lane before crashing into the tractor-trailer’s windshield.

Photos from the incident posted by the fire department show significant damage to the windshield and the Peterbilt’s hood.

The wheel was later found in a grassy area on the side of the interstate.

No other details of the incident were available.