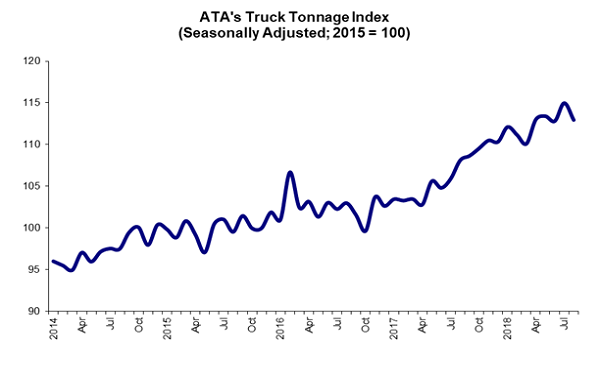 American Trucking Associations’ advanced seasonally adjusted For-Hire Truck Tonnage Index decreased 1.8% in August after increasing 1.9% in July. In August, the index equaled 112.9, down from 115 in July.

The not seasonally adjusted index, which represents the change in tonnage actually hauled by the fleets before any seasonal adjustment, equaled 120.4 in August, which was 5% above the previous month.

Trucking serves as a barometer of the U.S. economy, representing 70.2% of tonnage carried by all modes of domestic freight transportation, including manufactured and retail goods. Trucks hauled 10.77 billion tons of freight in 2017. Motor carriers collected $700.1 billion, or 79.3% of total revenue earned by all transport modes.