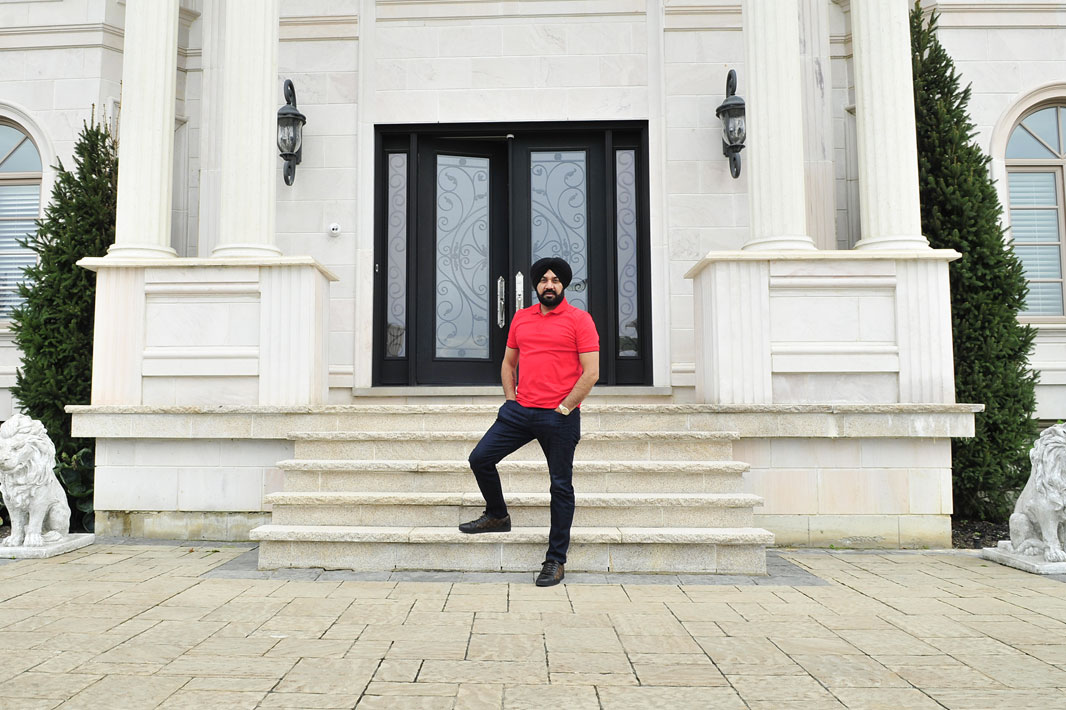 Andy Dhugga is a wise and knowledgeable businessman who can find a way through any maze! Andy arrived in Canada in 1989. He belongs to village Rampur Sunra, in Tehsil Phagwara of Kapurthala district in the north west Indian state of Punjab. After staying in England for a while, to lead a good and satisfying life, he decided to move to Canada.  It was a difficult scenario in Greater Toronto region to get a job. Andy was able to get job in a scaffolding manufacturing factory. Due to his problem-solving pragmatic attitude, he soon was promoted to position of a Supervisor. It did not take much time for him to further get promoted to Plant Manager. He led a team of over 150 employees.

Andy’s brothers and parents joined him in 1993. Since his younger days at the village, he was good with repairing machines. He often helped in his farm work as well. In Canada, Andy worked in a repair shop as a technician. In 1995 he formed a trucking company but had to close it soon after. In 1999 he formed the Millennium Tire Company – thus marking a successful leap ahead in the Immigrant history.

Andy was aware of his limitations when he got into this business. He faced many challenges from the industry itself. Initially the suppliers did not support him. Not discouraged by this, he was confident about his decision. He identified many relevant variables that gave Millennium tires an edge over existing businesses. His business multiplied manifold in a short duration and by 2006 the same suppliers approached him to sell their products to him.  When his company got the contract of Michelin tires his business earned for itself the immense credibility of being at the top, serving the tire needs of the customers.

Millennium tires has created its niche in the Canadian tire industry. Andy is a strong believer in giving the best service to his customers. He also believes that if the government policy addresses issues related to the recycling of tires and the taxes involved, then his industry will be able to provide even better service to the customers. The incoming Chinese tires are of concern to Andy Dhugga as well. There is a lack of accountability about the number of Chinese tires entering into the Canadian market as compared to the tires coming from the North American market. This issue must be addressed by the government bodies and will surely protect the environment and businesses towards the better.

Andy Dhugga is a mentor to many young minds. He is kind natured and helps everyone who approaches him. His team has people from culturally diverse backgrounds. He is engaged with his workforce and sees to it that the on boarding of an employee is done with the appropriate orientation is and right training.  There are a number of students and immigrants who are coming to Canada. Hence Andy gives a lot of stress on training per the best standards in Canada. It is mandatory for all his new hires and employees to be acquainted with all safety related issues.

Millennium Tires is now one of the top companies across Canada that is providing the best Tire service to Canadians. With branches nearly in every province and important cities, the company is looking towards further expansion. Andy has built a company that has a business ethic of ‘Customer is always first!’. His businesses are open for longer hours and do not shy away from emergency work, standing shoulder to shoulder with their Trucking fraternity.

When Andy was asked ‘Who is your strongest support?’, he replied that everyone has supported him in his family. His two brothers, Vir Pal Singh Dhugga and Kulvirranjit Singh Dhugga, his wife Barv Dhugga and two sons; Ricky Dhugga and Bicky Dhugga have all stood by his decisions, making his business a great success!

Andy Dhugga is not only a business leader but also takes his social responsibility earnestly. Being a sportsman himself, he endorses many Kabbadi events. He is trying to organize a big kabaddi event in Kartarpur, apart from other sports events in Canada and India, to mark the celebrations of 550 years of Guru Nanak Dev Ji’s birth anniversary.

Andy is taking the lead in raising funds for Peel Memorial Centre for Integrated Health and Wellness. He organizes barbeques at his business locations across Canada and is raising funds for local hospitals in various provinces as well. He also has not forgotten his village in Punjab and helps in organizing many social programs helping the senior and the girl child. Andy truly can be said to be a ‘Businessman of the People!’

He has an amazing collection of one of the finest cars of the world. Whenever he wants to relax in the city, he pulls out one of his cars and goes for a long drive. His two pets Bella and Niko are well-loved and seek his attention too, whenever he is at home after a hectic day! When asked how he enjoys his vacation, Andy said, “I love going to a quiet beach and enjoy the serenity of the place!” When asked what would he like to say to our readers, he said: