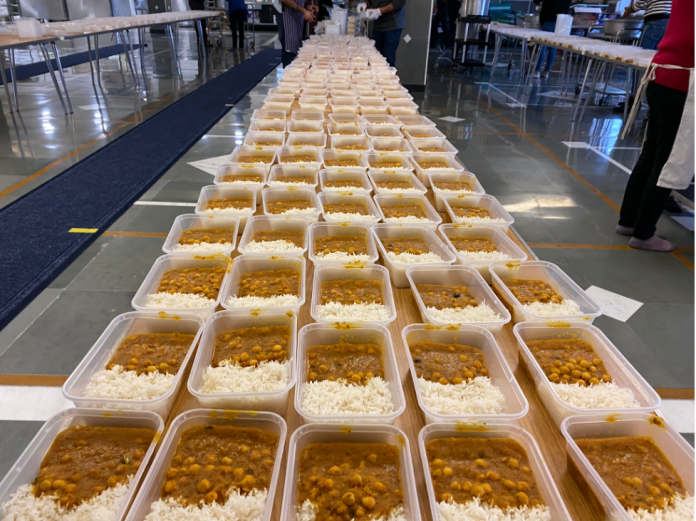 When news of a mutated strain of COVID-19 in Britain and South Africa surfaced triggering alarm across the world, thousands of truck drivers found themselves stranded on the UK-France border that was suddenly closed. Then, a group of Sikh volunteers stepped forward to provide free food to these stranded drivers.

Members of KhalsaAid travelled almost 350 km to serve hot meals to the drivers stuck in Kent. Also, the Sikh charity’s LangarAid members, who are known for their philanthropic work, travelled almost double the distance from Coventry, to take water and food in cold and rainy weather.

Volunteers at Guru Nanak Gurdwara in Kent’s Gravesend helped cook and pack the vegetarian meals before the group were given a police escort along the M20 to deliver them.

On the very first day of the special langar, members cooked 500 servings of chickpea curry with rice meals and 300 servings of tomato and mushroom pasta dishes for distribution.

Hours later, the group also received a donation of 1,000 pizzas from a local Sikh businessman who runs a Domino’s franchise in Kent.

“It’s horrible for [the drivers], there’s nothing here – no food, no shops – it’s like a prison for them. We can’t sit back and do nothing,” KhalsaAid founder Ravi Singh told BBC.

“No one is going to starve … You don’t have to be a Christian to know it is the season of goodwill; you just have to be a human being,” he said, talking about the NGO’s deep-rooted believe in the Sikh’s faith’s Langar sewa.

French authorities, who had imposed the ban to try to protect the continent from a new variant of the virus detected in London and southeast England, said delivery drivers could enter by ferry or tunnel provided they showed proof of a negative test for the virus. Select passengers will be allowed back on the continent, too.

Their efforts won praise on social media, with Twitter users lauding the groups’ “kindness” and “humanity”.

“Whilst some say, ‘so what, they are mostly EU drivers anyway’, proper Brits get out and help those in need. Thank you to all who have come to the aid of stranded truckers, you are the best of Britain,” a user wrote online.