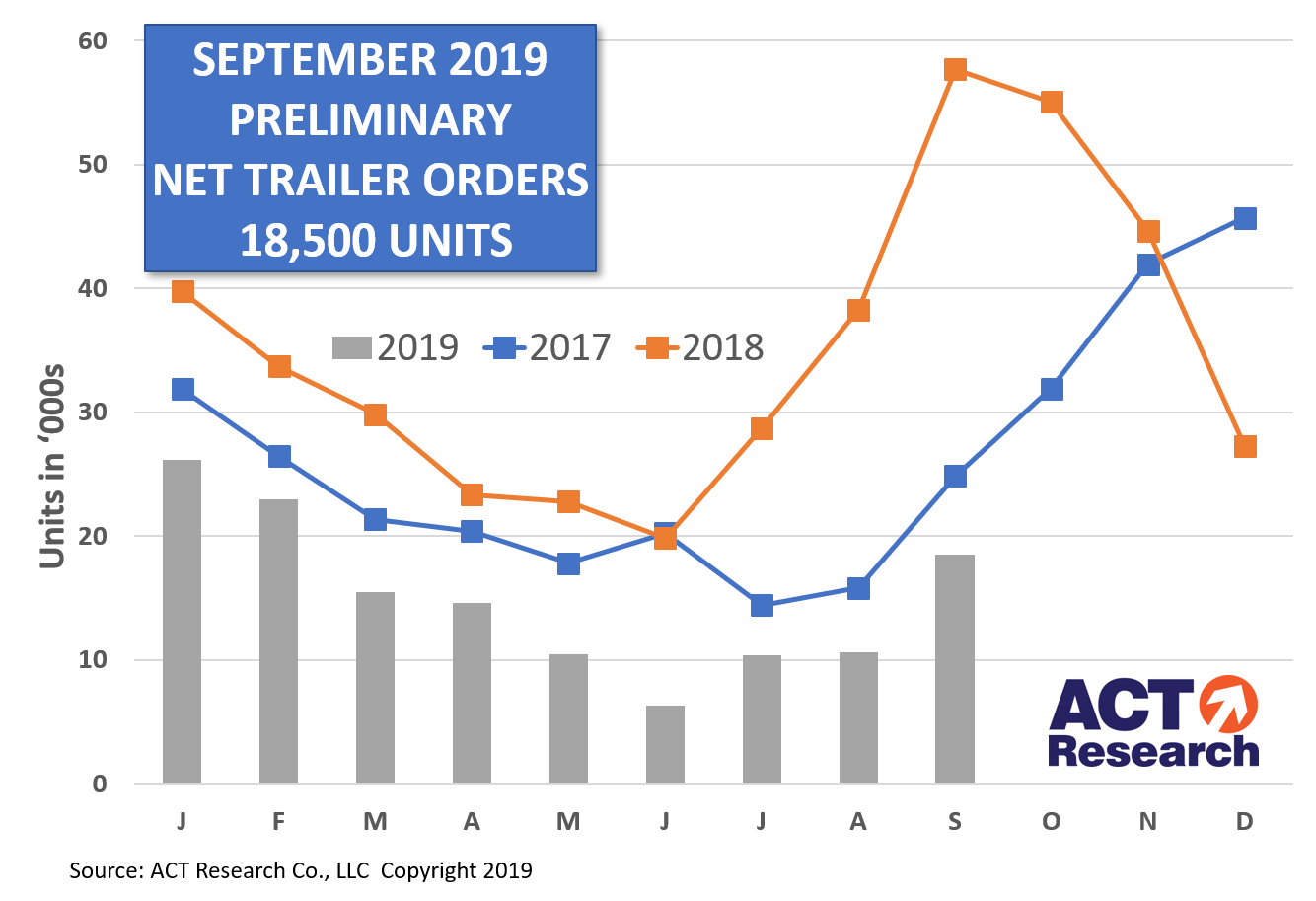 ACT’s preliminary estimate for September indicated that trailer manufacturers booked 18.5k net orders to their orderboards last month, a 75% surge from August’s subdued net order volume. Volume was 68% below a year ago, while year-to-date, net orders are 54% less than last year. Before accounting for cancellations, new orders were 21.4k, up 45% from August and 64% below last year. Final volume will be available later this month. This preliminary market estimate should be within +/- 3% of the final order tally.

ACT Research’s State of the Industry: U.S. Trailers report provides a monthly review of the current US trailer market statistics, as well as trailer OEM build plans and market indicators divided by all major trailer types, including backlogs, build, inventory, new orders, cancellations, net orders, and factory shipments. It is accompanied by a database that gives historical information from 1996 to the present, as well as a ready-to-use graph packet, to allow organizations in the trailer production supply chain, and those following the investment value of trailers and trailer OEMs and suppliers, to better understand the market.

“Given that the all-time monthly order record was set last September, a dramatic year-over-year decline was a foregone conclusion. However, the dramatic sequential gain is a significant takeaway. Fleets, while still leaning toward caution, are beginning to set their investment plans for 2020. A softer, but noticeable order season is now underway, as orders last month were the best since February,” said Frank Maly, Director–CV Transportation Analysis and Research at ACT Research. He also noted, “Some churn in the order board continues, although it appears that the pace of cancellations did slow last month.”

ACT Research is recognized as the leading publisher of commercial vehicle truck, trailer, and bus industry data, market analysis and forecasts for the North America and China markets. ACT’s analytical services are used by all major North American truck and trailer manufacturers and their suppliers, as well as banking and investment companies. ACT Research is a contributor to the Blue Chip Economic Indicators and a member of the Wall Street Journal Economic Forecast Panel. ACT Research executives have received peer recognition, including election to the Board of Directors of the National Association for Business Economics, appointment as Consulting Economist to the National Private Truck Council, and the Lawrence R. Klein Award for Blue Chip Economic Indicators’ Most Accurate Economic Forecast over a four-year period. ACT Research senior staff members have earned accolades including Chicago Federal Reserve Automotive Outlook Symposium Best Overall Forecast, Wall Street Journal Top Economic Outlook, and USA Today Top 10 Economic Forecasters. More information can be found at www.actresearch.net.

Previous articleDeFazio Calls For Investigation Into Chao Conflicts of Interest
Next articleWomen seem to like equal pay, becoming Truck Drivers